The Distortion of Perfection

I decided to document the motion of a pond as rain hit its smooth surface. I was intrigued by the way that a beautiful reflection of an overhanging tree became distorted by the ripples in the water, yet how this distortion in itself was beautiful. I thought that this could allude to our themes of dystopias and utopias. One would think that the distortion of such a lovely reflection would be a terrible thing, yet actually the rippling effect itself is stunning, demonstrating that things are never quite as we expect them, and there is beauty within something initially perceived as negative. It was also interesting that it was always water that caused this transformation- that something of the exact same material quality could distort itself merely by the way it moved. The changing geometries of water are also interesting, the way in which a raindrop falls and merges to form a larger body as it hits a surface. 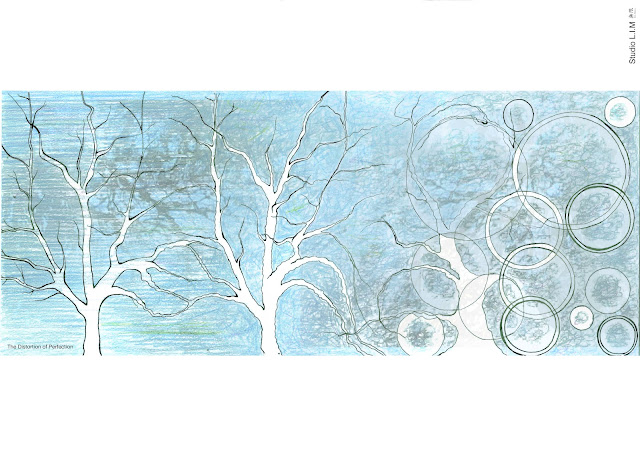 Here is an image I created to artistically explain the motion of a reflection of a tree becoming distorted by water drops. I spent a few hours (I lost track of how much time, probably longer than most people would take, I am slowww at drawing...) sketching, inking and colouring this with water colour pencils. Then I scanned it and put it through Photoshop, editing it slightly and adding elements from one of the video frames.
I tried to distort the tree more going towards the right of the image, finishing with circles representing the rings created on water when droplets tough them. I also changed my coloured pencil strokes throughout, going from straight ones, to more jagged ones, to completely spiralling ones, in other words distorting these lines as well. 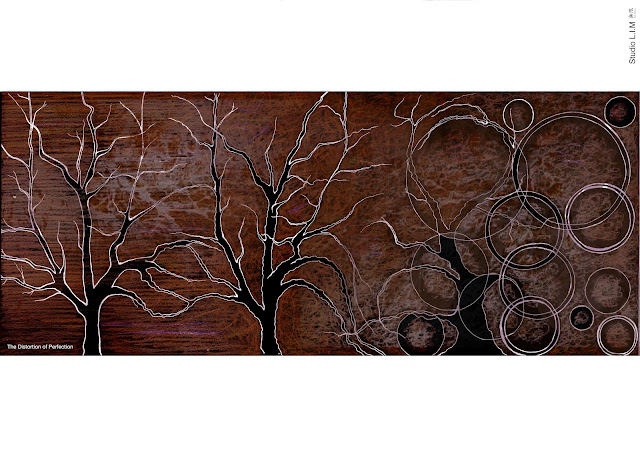 Just to see what it would look like, I decided to invert the image as well. I actually like it much more like this! This won't be relevant for presenting on Thursday, but could possibly come in handy at a later stage, as it appears like the dystopian twin of the above image.