For history last year we had to read journal articles and write a critical report on a building based on our findings. I wrote about the Scottish Parliament building, which I have since visited.

At the time of writing, I wasn't sure whether or not I liked this building. Certainly, after seeing it in real life, I do see that there are some design errors, such as the covered windows in a country where sunlight is so lacking. However, over all, I think this is a splendid design. It's modern design juxtaposes nicely against the historic centre of Edinburgh, and despite it's designed appearance it really melds into the land of the next door Holyrood Park. Plus, for the entire tour of the building I had my hand running along the walls... it is made out of the smoothest concrete I have ever felt in my life! Stunning!

Most of all I probably love this building because of what it symbolises. Being Scottish myself, I have a great faith in my country, and to be, this building really does symbolise devolution, and Scotland's autonomy. I hadn't published this before for whatever reason (it wasn't to do with grades, that's for sure... I got A+...) but now that I've found it on my laptop I think it's a brilliant time, especially since in September this year Scotland will be holding a referendum for independence that I dearly wish I could vote in.

Can architecture affect democracy? This question can be posed when analysing the Scottish Parliament building, in Edinburgh, Scotland: a symbol of a small country trying to stand up on its own politically. Designed by EMBT and RMJM, the building has a strong concept deeply rooted in Scottish landscape, history and culture. This lead to a design that was both praised and criticised, becoming an icon worthy of what it stands for. Despite its many flaws, it is certainly unique; and the very fact that it caused controversy could be seen as an embodiment of what it represents: the discussion of ideas and differing opinions is exactly what is meant to take place within it. 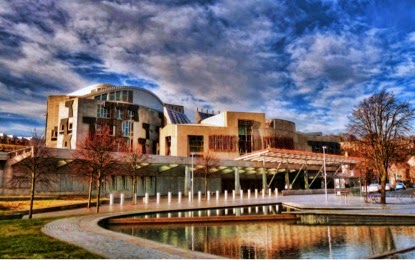 With metaphors and symbolism deeply rooted in Scottish culture and geology, Miralles’ simple concept captivated competition judges. Instead of designing a remote monument, Miralles’ concept of bundles of leaves and sticks conceived the new parliament as a gathering in the land.[1] This relationship with the landscape furthers the idea that Scottish identity is closely related to its rugged countryside,[2] something that Miralles expanded on when he created his organic building, made of stepped contours and acting as a median between the landscape and the urban experience.[3] Moreover, Miralles imagined undulating hull-like forms: boats in the building that could move about and change depending on the circumstances.[4] This could also be a metaphor for the actions that take place within the building: since ideas in politics, as well as the representatives debating it change, these hulls could show the flexibility and willingness to change that would be evident in a new government aiming to progress its country. 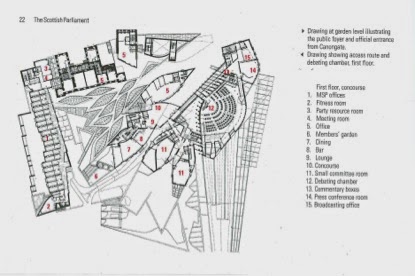 Considering that Miralles’ concept was so strong, it is not surprising that an impressive design was formed. It takes into the account the programme of the building, allowing the public and its representatives to be near and influence one another, and also provides an incredible visual experience with its style and beautifully crafted detailing. There are two circulation routes within the building: one for the public, and one for the MSPs. This allows them to interact, but also retains a degree of separation so that workers are not always overwhelmed by the public.[5] Conciliation amongst the MSPs, rather than confrontation, is encouraged in the debating chamber, which is shaped like a rough, pointed oval.[6] However, confrontation is possible, in the public amphitheatre at the foot of the Parliament, perfect for protests.[7] The spatial experiences within the building are complex, with different areas evoking different responses, such as the monastic under-croft feel of the dimly lit entrance foyer, and the cellular MSP offices,[8] which culminate in a cosy inglenook window bay that MSPs are reportedly very happy with.[9] The fractal geometries of the building not only add interest to detailing, but, in the case of the façade of the MSP offices, demonstrate Miralles’ notion that the ‘system’ in a large building should not dominate the individual, meaning that the small scale of these fractal elements is perfect for this democratic institution.[10] 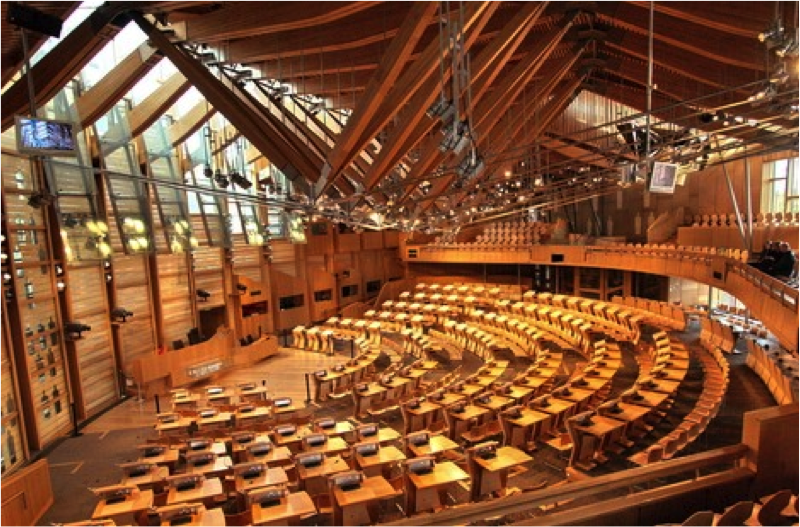 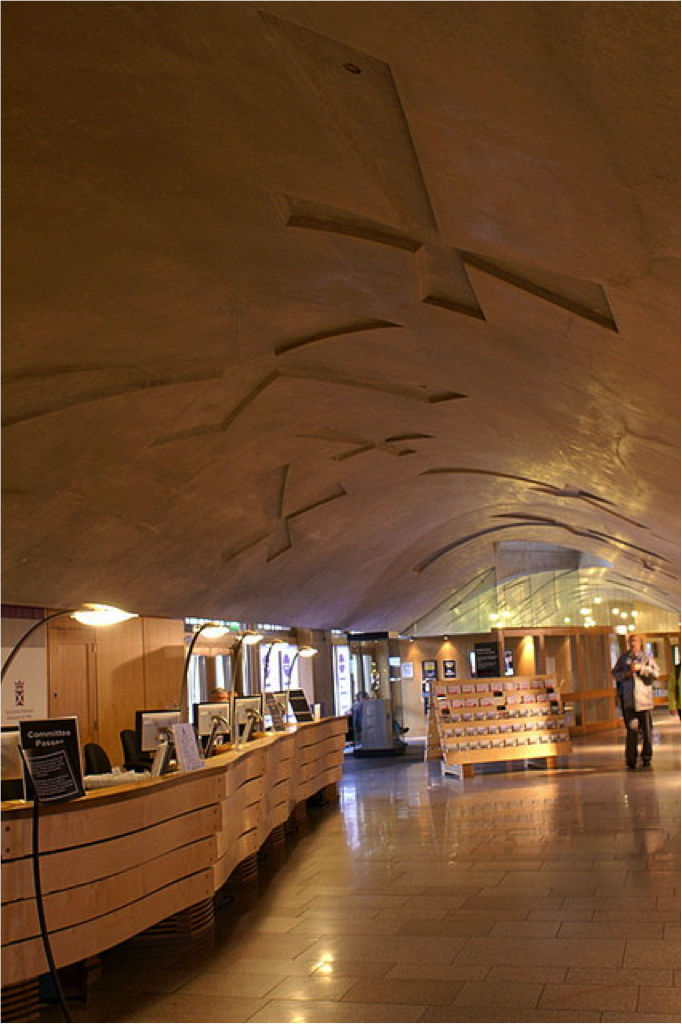 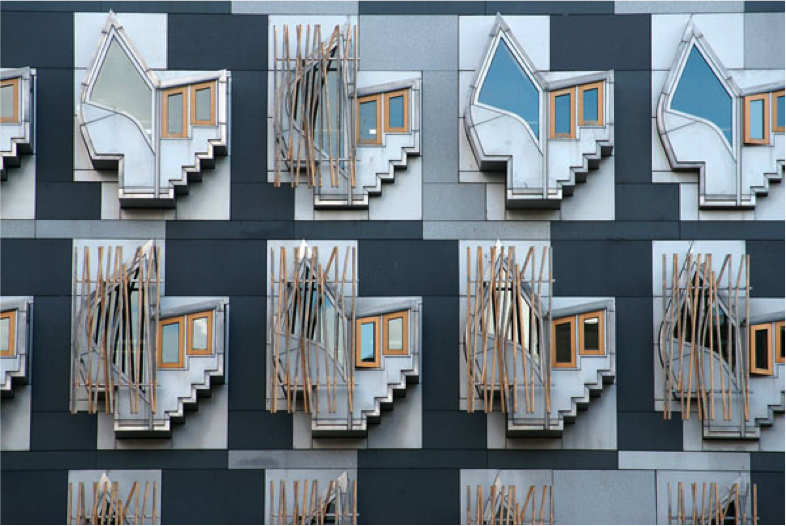 Figure 5: The MSP offices façade is an example of the fractal geometries employed throughout the building.
"Pesquisas escocesas." AV Monografias 111-112, no. October (2005): 235

Despite the building’s interesting concept and design, there was an outcry caused due to a variety of factors, including its style, tectonics and the fact it far exceeded budget. The RIBA Stirling Prize judging panel questioned whether the fact that a building the people apparently did not want was being constructed, meant that the government was letting them down.[11]As the building is situated right in the heart of Old Edinburgh, at the foot of the Royal Mile, some critics believed the design might compromise the heritage of the area,[12] while others complained that it was far too detailed,[13] or that some of its elements, particularly its decorated windows, would be better suited to Miralles’ Mediterranean homeland, as Scotland has infamously little sunshine, and these windows could compromise the flow of light.[14] The tectonics of the building were questioned when a beam fell from the roof,[15] and local businessmen were upset that Scottish materials were not used.[16] Nevertheless, the greatest criticism was the fact that the project far surpassed its budget.[17] However, since the programme was continually enlarged, it is not really surprising that this occurred.[18] Furthermore, the Scottish Parliament building, as the embodiment of the popular spirit of devolution[19] can be seen as being far more important than other British buildings that also went over budget, for example the Millennium dome, upon which a shocking £750 million was spent.[20] These issues all raised discussion on the building, and since challenging and considering opinions is exactly what takes place within a Parliament, this could be seen as the materialisation of democracy. 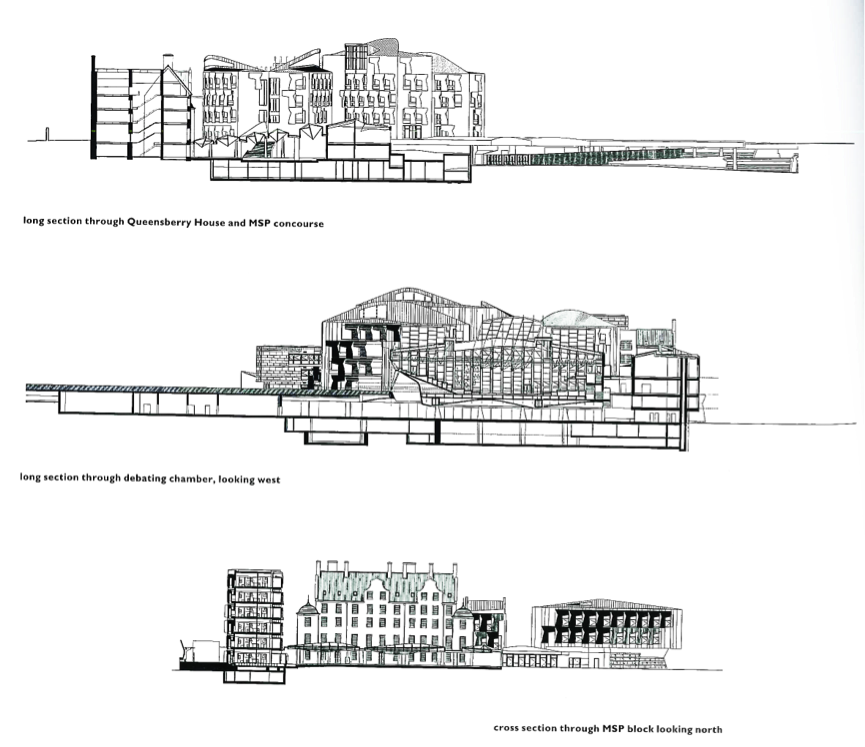 Figure 6: The amount of detail in the design is evident in the complexity of the building sections.
Slessor, Catherine . "Scotland the Brave." the architectural review 216, no. Oct-Dec (2004): 46-63.

In spite of its many criticisms, the Scottish Parliament building, with its compelling concept, interesting design and ability to evoke strong reactions, is certainly significant. Miralles’ concept focussed on the Scottish people’s connection to their countryside, and envisaged the parliament as a gathering in the land. This lead to a design that allowed the people and their representatives to mix, it encouraged conciliation, while at the same time also providing space for protest. Although this building sparked controversy, it could be argued that this in itself shows the building’s success. It is the embodiment of what it supposed to occur within it: the discussion of ideas and opinions.

Email ThisBlogThis!Share to TwitterShare to FacebookShare to Pinterest
Labels: ARCHHTC 235