A review of another student's work. She was in masters, and spent about €700 from memory making this... she did get sponsorship however, and in the end sold it, so it was very successful! 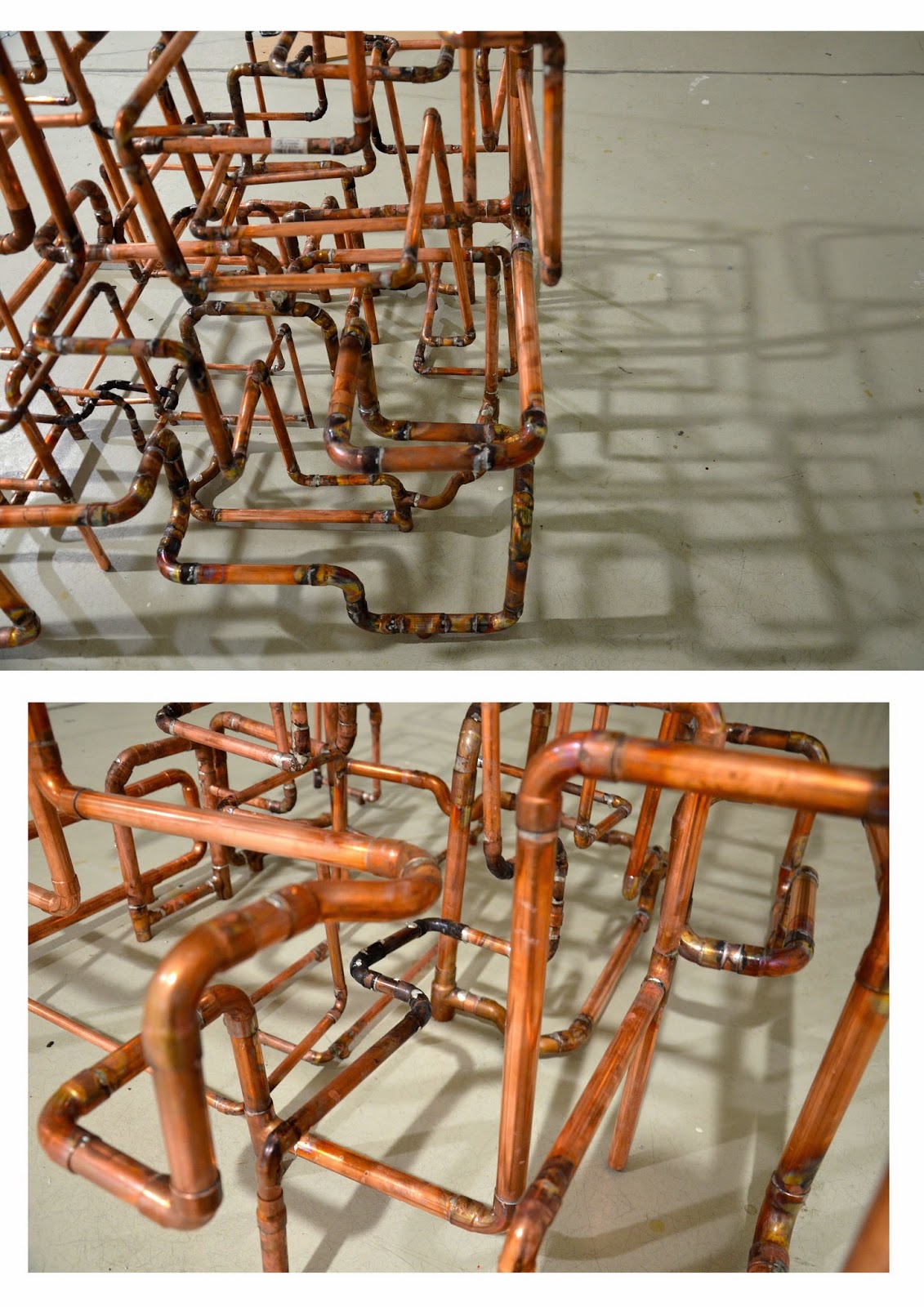 Reminiscent of pieces by Matthew Warren and perhaps even M.C. Escher, Number 69 (Pipes) appears to defy structural and logical laws, as it seemingly twists and bends for infinity within the strict confines of an invisible box. Number 69 is a stunning example of an everyday, industrial, and often hidden object, turned into something beautiful.

Created by welding and bending together small pieces of pipe in a manner similar to those executed by Matthew Warren, Number 69 appears to almost rise up from the ground in an elegant symphony of seemingly floating pieces. This is enhanced by the shadows created on the ground: linear webs of beauty that make it appear as if the solids of the piping are dissolving into the semi-transparent fragility of a shadow, and floating away. The structural load has been distributed across the piping pieces, creating a freestanding, ethereal cubic form with pieces that seem to individually defy gravity. This box-like form is perhaps metaphorical, showing the connections within a brain, the thoughts trapped within a box, bursting to get out.

The confined chaos within the rigid structure of the box could also be related to the bending of perception. Generally, we think of pipes as linear and functional objects, however within Number 69 they are flowing and beautiful. Pipes of different diameters are also used, creating flow in all directions: vertically through the bending of the pipes, and horizontally through the constantly varying sizes. Moreover, the careful joining of the pieces creates what appears at first sight to be one continuous, flowing line of piping, which seems to go on for infinity and is almost optical illusion like in quality, calling up images of M.C. Escher’s illusionistic and impossible drawings.

Number 69 is successful because it not only brings to mind many conceptual ideas, but also causes the viewer to question how the artist managed to form such a structure. One can clearly see the effort put into this piece, and can imagine that many drawings that would have been produced prior to its construction. Perhaps even calculations and a CAD model were made, similar to the workings of Matthew Warren. This piece appears almost perfect, but some of the pipes are still off-colour, and some solder has run down them and stuck to the floor. This human error perhaps even adds to the piece however, reminding us of the pipes’ industrial links.

Generally hidden between wall planes and flowing with waste, pipes are not usually regarded as the most attractive of objects, rather they are seen as fairly industrial. However, through an equally rough and manufactured process of welding, bending and shaping the pipes, Number 69 defies the notion of what a pipe should be, and instead creates something more abstract and beautiful.