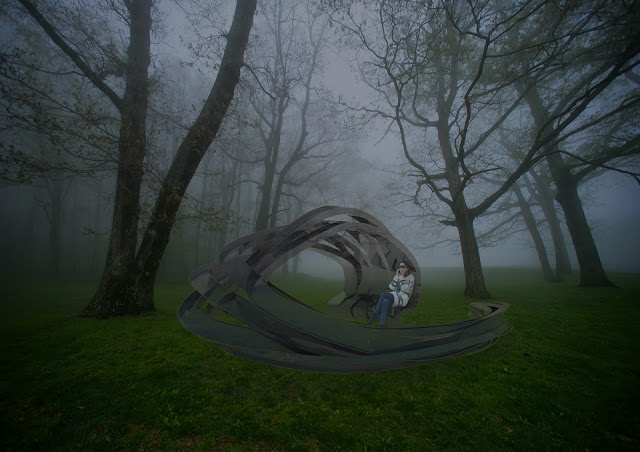 So for one of the classes I am taking, Digitale Formfindung (Digital Form finding) our first exercise was to learn how to use 3DS Max, and produce a rendering of a free form pavilion. So I spent an entire weekend basically solely looking at YouTube videos, and after some fixing up, this is what I came up with.

I spent ages yelling at the poor woman, hahaha... I simply couldn't find stock imagery that really suited exactly what I wanted. I have two free stock websites I rely on pretty heavily, and they have never failed me before yet, but... like all of their images of seated people looked way too summery!

I also got really annoyed because it's pretty obvious (in my opinion) that the pavilion isn't truly part of this scene. It simply isn't photorealistic enough. However, for a first proper rendering attempt, I guess I'll forgive myself  Also, I wanted the metal to reflect the scene around it... but instead of becoming reflective, it just became slightly transparent. O.o Hmm. I added the background as a bitmap environment map, so it was part of the render, but...

Oh and I would never actually design something like this... especially since I don't really think it could be constructed. I played for ages with the stupid splines but couldn't get them to go in a way that both looked good and looked constructible.  In the end I picked the 'looks good' option, because this is a rendering assignment... however I will most likely lose marks for this.

Email ThisBlogThis!Share to TwitterShare to FacebookShare to Pinterest
Labels: TUMDigitaleFormfindung